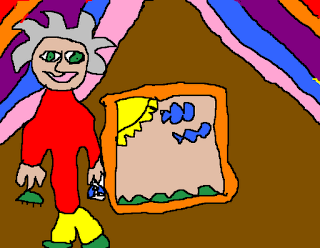 Did you know a man called Andy warhol was a very good artist. He made a film about a man that was sleeping for six hours, that's why it was called 'SLEEP. Andy warhol did Pop Art and he did it in America where all the popular people lived. Andy painted Marilyn monroe who was an actress in movies. Andy also did pop art of the famous boxer Muhammed Ali.


The main reason why Andy Warhol is famous is because he was on of the first people to do POP ART. No one can do better pop art then him.Andy warhol’s POP ART is very famous and nearly everyone  knows how famous his art is. He takes photographs of celebrities and then he does pop art over it. If you do not know what POP ART is, pop art is when Andy Warhol does art of popular brands, popular people, and popular food and drinks.

I like that Andy Warhol uses bold outlines and he uses detail. I think that Andy warhol would have loved creating art!
Posted by Unknown at 3:33 PM