My Birthday Treats by Rave 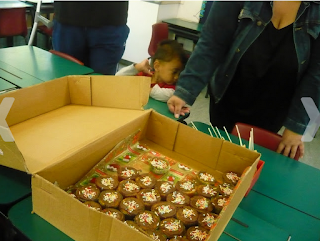 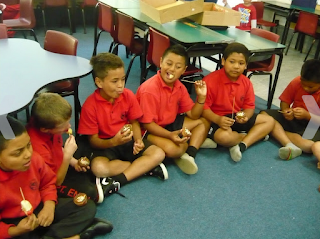 On a Friday Morning after assembly , Room fourteen were in for a scrumptious surprise.

My parents made some chocolate cupcakes with icing, filled with chocolate chips, vanilla and coconut. Theyalso made some fruit kebab's with marshmallows apples and bananas on a stick. “Mmmmm” I said.
When I called out people to get their cupcake and fruit kebab, I had to call two boys
and two girls at time. When the boys and girls all got there cupcake and kebab, they could eat them. They were so delicious people wanted another cupcake and kebab!
There were leftovers, I gave the leftovers out on morning tea.

Room fourteen were feeling so excited and so happy because they were loving their cupcakes and the kebabs. I hope my next Birthday I can bring some more treats to school next year!
Posted by Unknown at 4:17 PM